Fwd: In the Spotlight – Nepal

Nepal is best known for Mt. Everest and the Himalayan Mountain Range, as well as being the home of Buddhism.  Surrounded by China and India, Nepal is a landlocked country of over 25 million people.  The capital city of Kathmandu has a population of ~2.5 million, and is home to the Himalayan H3.  According to their website, the Himalayan H3 was founded by Roger Binks, assisted by Keith Robinson, with the first trail taking place on 15 October 1979.  The first trail consisted of two hares (Binks & Robinson) and 6 runners from Canada, Australia, Sweden and the UK.  Starting out as a hard corps Men's only hash, "these runs continued on Monday evenings with the occasional Saturday special. About 1985 ladies broke in and it became the fast hash. This continued until the early 1990s when it faded out due to 'dreadful mismanagement'."

The hash genealogy confirms that a second hash, the Himalayan Mixed H3 was founded on 19 March 1980, by John White. This new club ran on Thursday evenings, and the trails were less extreme.  After the demise of the Men's Hash, the Mixed group started running on Saturday, and still does to this day, as the Himalayan H3.  I recently had the extreme pleasure of running with the Himalayan H3, which took place on Monastery Road in the Kathmandu Valley.  The directions to the start took us through the southern side of the city, where the roads are a mixture of paved and dirt streets.  Heavy traffic combined with stop lights, circles, and policemen directing traffic, caused many a traffic jam.  It took just over an hour to make our way the 20 Kms, but the directions were superb, and brought us up a narrow single lane road to a dirt parking lot, that was surrounded by several monasteries.

The start was overlooked by a large Buddha statue of the Dollu Monastery, which we eventually ran around on our way to the top of the mountain.  The trail on this day (~6.5 Kms) was shorter than what they usually run (8-12 Kms) according to the pack.  The shorter trail was slightly disappointing, because it was an awesome trail.  I describe an awesome trail as one you do not want to end, because it is so enjoyable . . . but eventually a hasher needs to stop, put on a dry shirt, and enjoy a nice cold beer.  So, after a long climb up the side of a mountain, followed by a long downhill loop back to the start, the gathered pack of about 20 settled in for a fun and entertaining circle.

The national beer of Nepal is Ghorka Beer, and was actually pretty good, but I did not see any at the hash.  The cooler had Tiger, Heineken, and a couple other assorted brands, along with a few bottles of cider.  We honored the hares after the excellent trail, the usual assortment of mischief was also recognized, and in the end, for some odd reason, I received the honors of the Hashit.  The voting was rigged for sure, but I enjoyed my down-down out of the sacred mug.  The hashers of the Himalayan H3 are very welcoming and friendly.  After the festivities of the circle, about half the pack ventured back towards the city to enjoy a dinner of various local culinary delights including Buffalo, compressed rice, and other vegetable dishes.  With the sun setting, and the temperature dipping, I had to say goodbye.  No doubt, if you ever get the chance to visit Kathmandu, make sure to look up the Himalayan H3.


--
You received this message because you are subscribed to the Google Groups "Go To The Hash" group.
To unsubscribe from this group and stop receiving emails from it, send an email to gotothehash+unsubscribe@googlegroups.com.
To view this discussion on the web visit https://groups.google.com/d/msgid/gotothehash/01ad01d5e890%24bd8e4550%2438aacff0%24%40gmail.com.

--
On on
Phnom Penh Hash House Harriers
If you no longer wish to receive emails from P2H3, please reply with "Unsubscribe" in the subject line and message body. Thank you.
Posted on Wednesday, February 26, 2020
Email ThisBlogThis!Share to TwitterShare to FacebookShare to Pinterest

April flowers bring . . . ???  Hopefully glorious hashing in Trinidad.  Yes, April is finally in our windshield of hashing events.  Less than 60 days until many of us are gathered up getting our shiggy on, followed by cold beer, down in the Caribbean.  If you plan to sell a rego, or pick one up for transfer, the established cut off date is 29 February (yes, the 29th, it's a leap year).  Hope to see many of you there.

Next, an update from Haggissimo on the worldwide hash efforts to support Australia . . .

It's been an amazing couple of months at ONONforOZ since we started on 12th January (see the Facebook page).  The original idea was that we might get a few hashes to organise an event for Australia Day on 26th January and send a few dollars to small Aussie Charities that are fighting the Bush Fires. Our fellow hasher Rover lost his life whilst volunteering for Belowra RFS (Rural Fire Services) and he was the inspiration that got us started.  What happened since has been totally gobsmacking. The Hash jungle drums started beating, mates invited mates. Over 1100 Hashers joined the group, over 100 hashes organised events, raised money, and pledged to send donations directly to our nominated charities. That total is now over AUD 35,000 plus an additional AUD 10,000 approx from the sale of patches.  Our last push is to create a commemorative Hash shirt to recognise those Hash Chapters that have supported the fund raising campaign. if your kennel would like to get involved please visit ONONforOZ and pledge to hold an event. Please note pledges should be made by 29th Feb to get your kennel's name on the Shirt (but you can hold your event on any date that suits).

Over the past couple months, I have been travel hashing around the South Pacific.  The available resources to find hash clubs there were very outdated, and after much research and visiting several islands, all the current details have been captured in a new hash contact page listing all the clubs that I could find in the Pacific (visiting Hawaii, Japan, Taiwan, Saipan, Guam, East Timor, Vanuatu, Solomon Islands, and now Papua New Guinea) . . . here is where you can hash on Pacific Islands . . . http://gotothehash.net/pacific.html

Hashing is amazing on all these island paradise locations, and I'm always happy to receive updates and corrections.

In the Spotlight – Solomon Islands

Solomon Islands (located approximately 1000 miles north-east of Australia), like many of the island nations of the South Pacific has a long history of occupation and conquest.  In more modern history, European powers first visited the islands in 1568 when Spanish explorer Álvaro de Mendaña de Neira sailed from Peru in search of Australia.  He named them Islas Salomón (Solomon Islands), and then sailed on.  Centuries later, English explorer Captain Gibson arrived in 1893 and many of the southern islands were taken on as a British protectorate, and would be held until 1978.  Currently, the sovereign nation of Solomon Islands is made up of over 900 islands large and small, with the capital city of Honiara located on the island of Guadalcanal.

The hash genealogy states that the hash arrived in Honiara on 11 July 1973, when Brian Leach and Derik Taysum organized the first running of the Honiara H3.  Longtime resident "Shorty" has been running with the Honiara H3 off and on for nearly 30 years, and he had many interesting stories to tell of hashing the Solomon Islands, and backpacking around Asia.  Another hash club was formed in Honiara in September of 1996, when Jeff "Rabbi" Moore and Tom "Claymore" Schoen formed the Honiara Full Moon H3.  Neither hash club has any recorded offspring, but nearly 50 years later, the Honiara H3 is still running strong, and is a family friendly hash.

During my recent visit, I joined a pack of about 25 up on Vavaea Ridge, for a trail that was mostly on dirt roads and tracks, traversing up and down the hillsides behind the city.  Cost to the join the hash was about 60 cents US, which covered the down downs.  For a separate fee, and you could buy individual beers for about $2.50 per can.  Water and softies were about $1.25.  Circle was short and to the point, with only one song, but that is common with many of the island hash clubs in the South Pacific.  The pack was very friendly, and following the circle some of the hashers enjoyed dinner at one of the Chinese establishments in Honiara. Great times here in the South Pacific, and no doubt, if you get the chance make sure to join the Honiara H3.

Upcoming hash events for the month of April 2020 are listed below.  See the website for more details: http://gotothehash.net/e/hashevents20-04.html

Apr 3-5
H4 is in H5
Hosted by the Hangover H3 and Harrisburg Hershey H3 in Harrisburg, PA, USA.

Apr 11-19
Prelube to Interhash Caribbean Cruise
Hosted by the Moon Over Barbados H3 in the Caribbean.

Apr 17-19
Prelube to Interhash
If you can't participate in the whole cruise, catch the end in Barbados.


See the whole two year calendar of events at http://gotothehash.net/hashevents.html

If you have any hasher friends that would like to subscribe to this rag, let them know they can sign up by sending an email to gotothehash+subscribe@googlegroups.com


--
You received this message because you are subscribed to the Google Groups "Go To The Hash" group.
To unsubscribe from this group and stop receiving emails from it, send an email to gotothehash+unsubscribe@googlegroups.com.
To view this discussion on the web visit https://groups.google.com/d/msgid/gotothehash/007001d5ea17%242fc848a0%248f58d9e0%24%40gmail.com.

--
On on
Phnom Penh Hash House Harriers
If you no longer wish to receive emails from P2H3, please reply with "Unsubscribe" in the subject line and message body. Thank you.
Posted on Tuesday, February 25, 2020
Email ThisBlogThis!Share to TwitterShare to FacebookShare to Pinterest

Run is set for Sunday. Starting location is "The Beach". A-B-A run. Hopefully we find a volunteer to be the walking hare. On On.
Dropped pin
Near បឹងកប់ស្រូវ, Phnom Penh
https://maps.app.goo.gl/qk8EKEhAW3q8JPnj6
Posted on Saturday, February 22, 2020
Email ThisBlogThis!Share to TwitterShare to FacebookShare to Pinterest 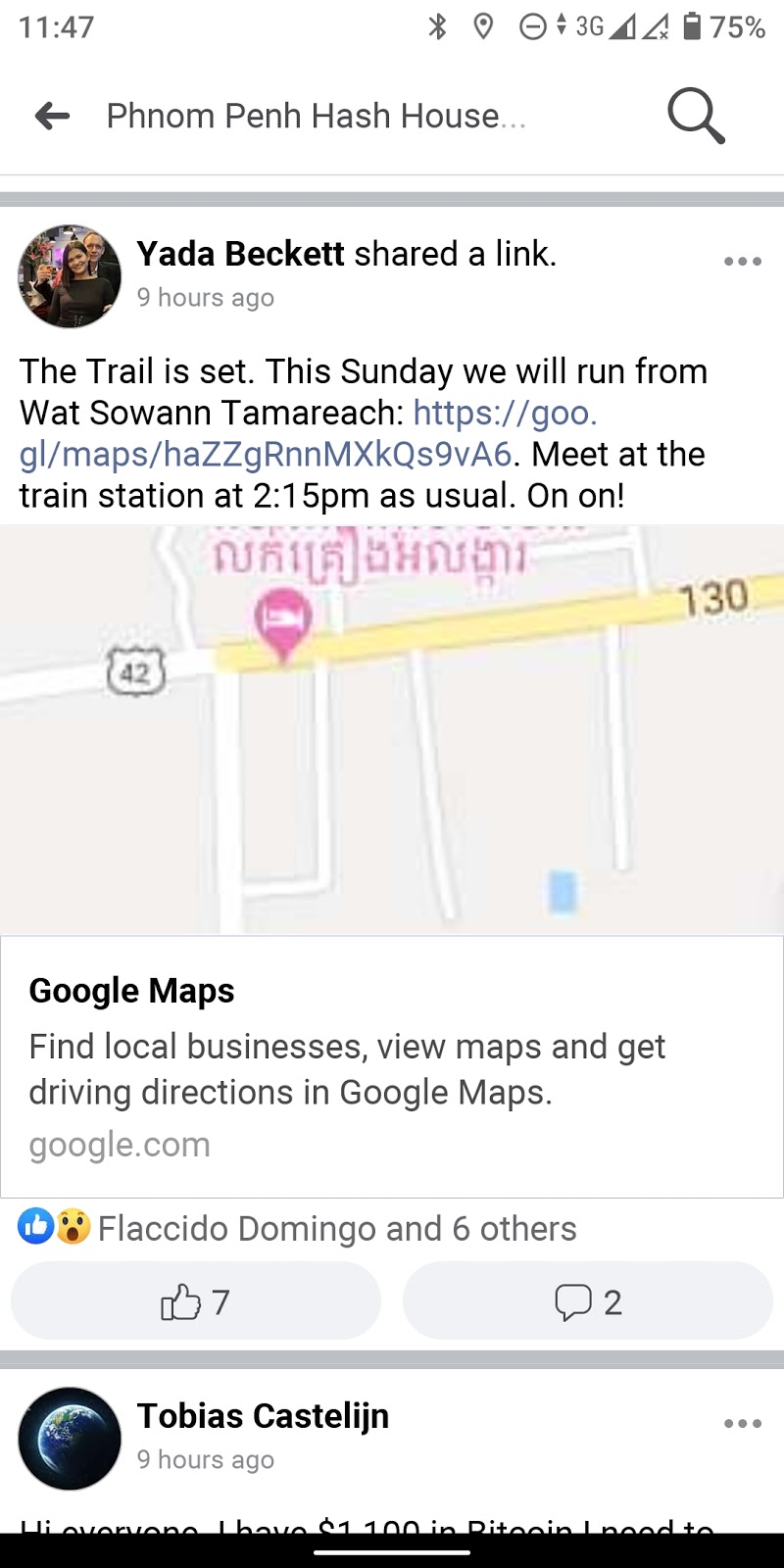 Posted on Saturday, February 01, 2020
Email ThisBlogThis!Share to TwitterShare to FacebookShare to Pinterest

We need hares! Do you want a Hash name? Do you want to drink beer for free? Then become a hare! Virgin hares will be paired up with an un-virgin Hare!

Get Email from P2H3